I do a lot of short runs which is really hard on the batteries and alternator....the massive draw from the glow plugs and starting, then only being run for about ten minutes before being turned off. That's a recipe for bad batteries prematurely, and killing off the alternator as well. With my batteries being over four years old, they're starting to have issues, and with it being cold outside, that only amplifies my issues. To add insult to injury, I damaged my block heater wiring when my serpentine belt failed. Still works, but the wiring gets too hot....so hot that the plug was softening and the blades moved when I unplugged it the other day! Time for some intervention.

My first order of business was to replace the wiring on the block heater. That was easy enough. I got 10 feet of 12 gauge extension cord, cut off one side, stripped wires, soldered them to original wiring close to the block, sealed them with shrink-tubing with built-in sealant, and then routed the cable. However, I routed it to a different location. No more excessive warming up of the wire/connector! More on the relocation part below.

My second order of business was to figure out how to keep my batteries topped off. Since I do a lot of short trips, my best bet was to charge my batteries when the truck isn't in use. However, I didn't want to have to pull out the charger, open the hood, hook it up, and then have to keep coming outside repeatedly to monitor the charge constantly. A smart charger seemed to be the way to go. I could hook it up and just leave it. It would determine the battery's state and modify the charging rate based off that, and it can be left connected for extended periods with no ill effect on the batteries. (well, supposedly...I've never found one that could truly be left on for a long period of time, but since the truck will be started nearly every day, that's not a worry) There are a lot of smart chargers out there. I wanted to get one that I could install on my truck and just plug in the truck like I do with the block heater. I chose the NOCO Genius Gen1 with the 10 amp option vs the 4 amp.

Finding a location I liked for the installation was kind of tough. It's big. It's heavy. The engine compartment is packed with crap as is! I decided behind the grille was a good idea. I chose the passenger side since there is extra space over there. I don't have a picture, but pull back the rubber air dam and you will see there is a small piece of fiberglass you'll have to remove (I used a cutoff wheel on a dremel) whose sole purpose is to act as an attachment point for another rubber air dam. Once that is removed, you will have enough room for the charger...barely. 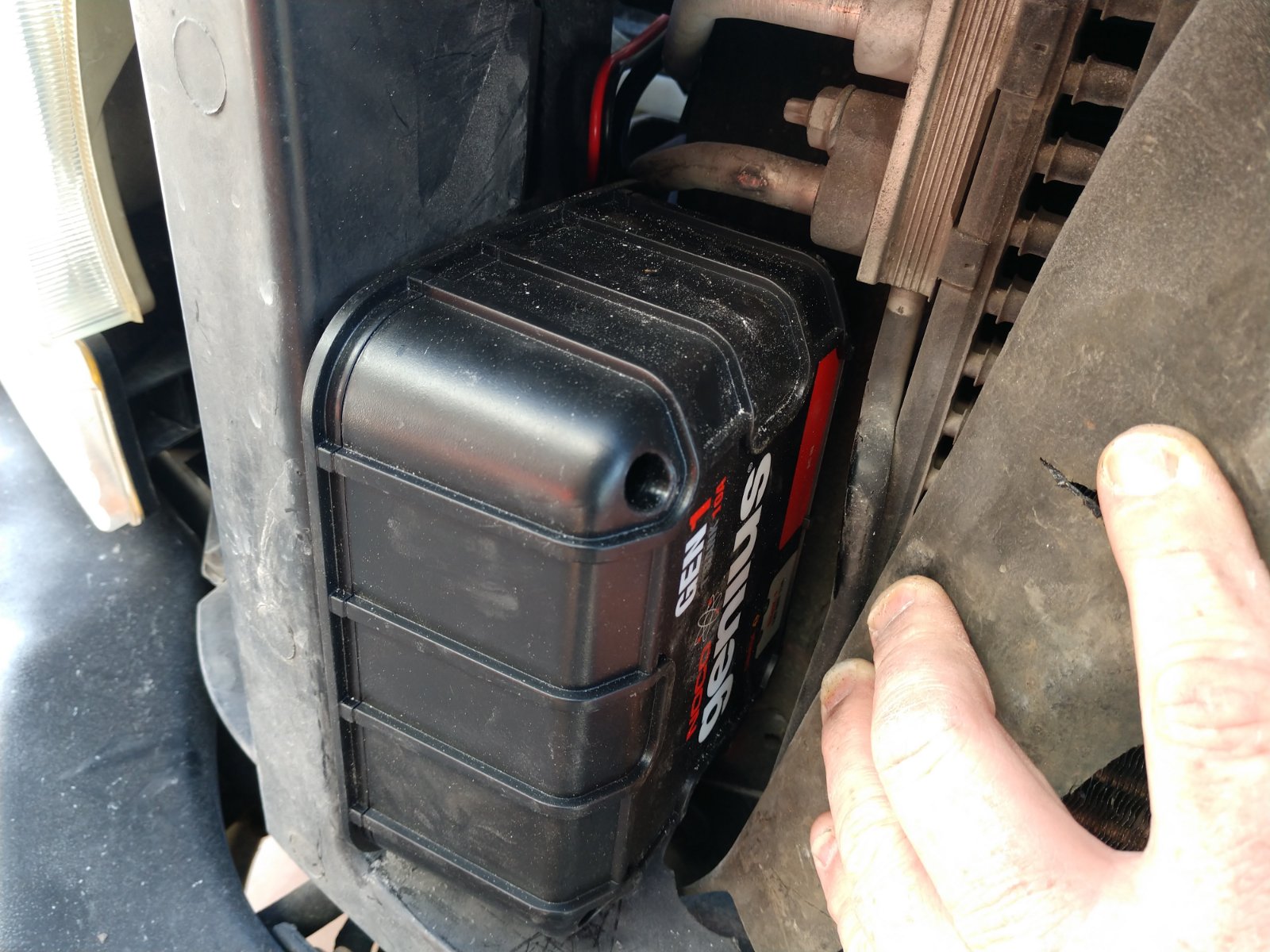 You can see it's a tight fit with the air conditioner lines coming really close. Also, in this next pic you can see a good routing hole for the charging wires...or rather one of them. Per guidance from a variety of sources, I ran the negative cable to one battery and the positive to the other. This is supposed to give more even charging for dual battery systems. 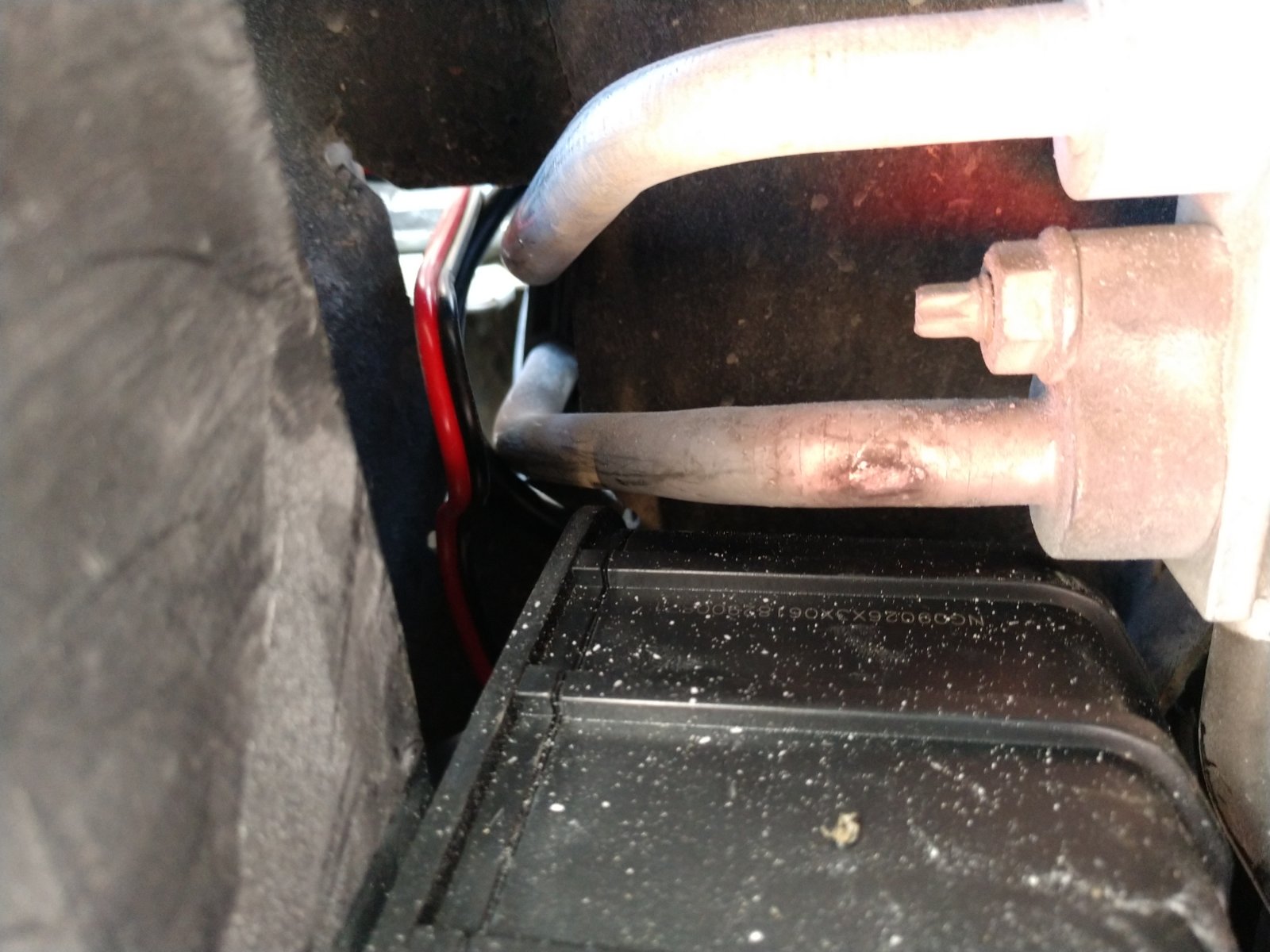 A pic of how it looks with the air dam trimmed and tucked into place. 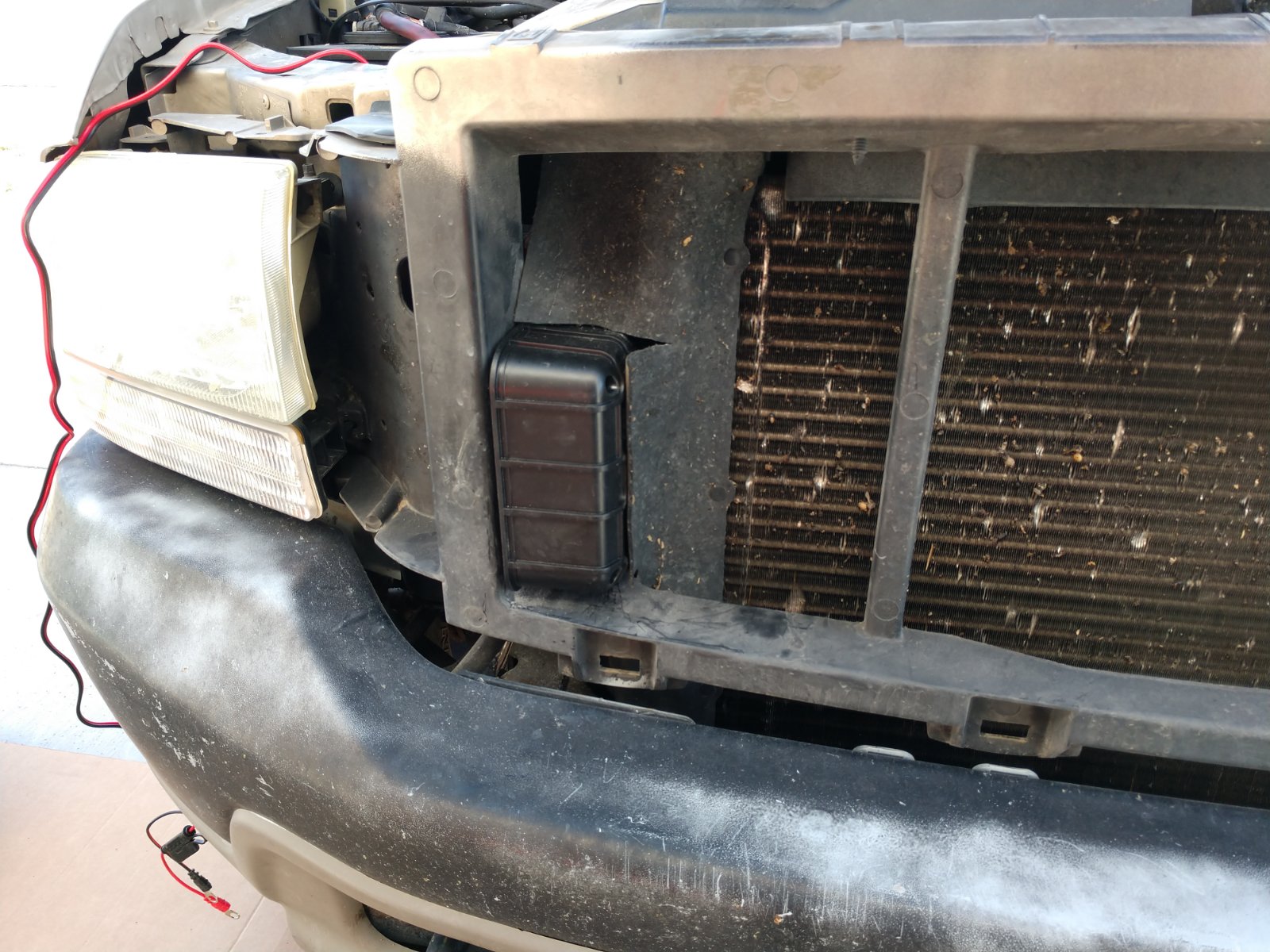 I cut a small hole in the air dam so I could readily see the indicator and warning lights, letting me know if everything is good or if I have a problem. 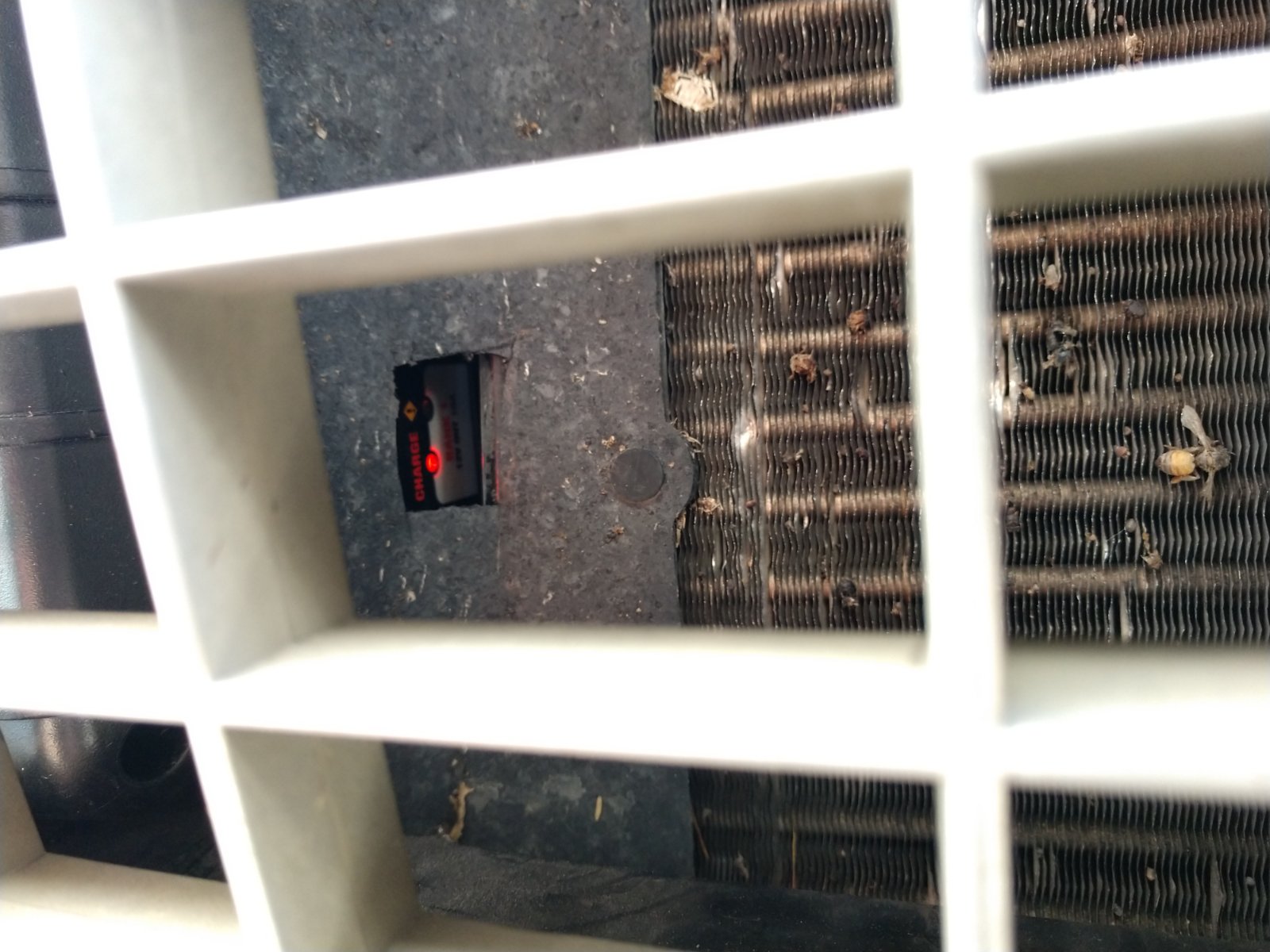 I neglected to get a picture, but the power cable for 110 was ran just a little bit to the right, then up over the intercooler support, across the radiator support to the driver's side, around another support bracket, and out a hole in the front right around where the air filter draws air from. 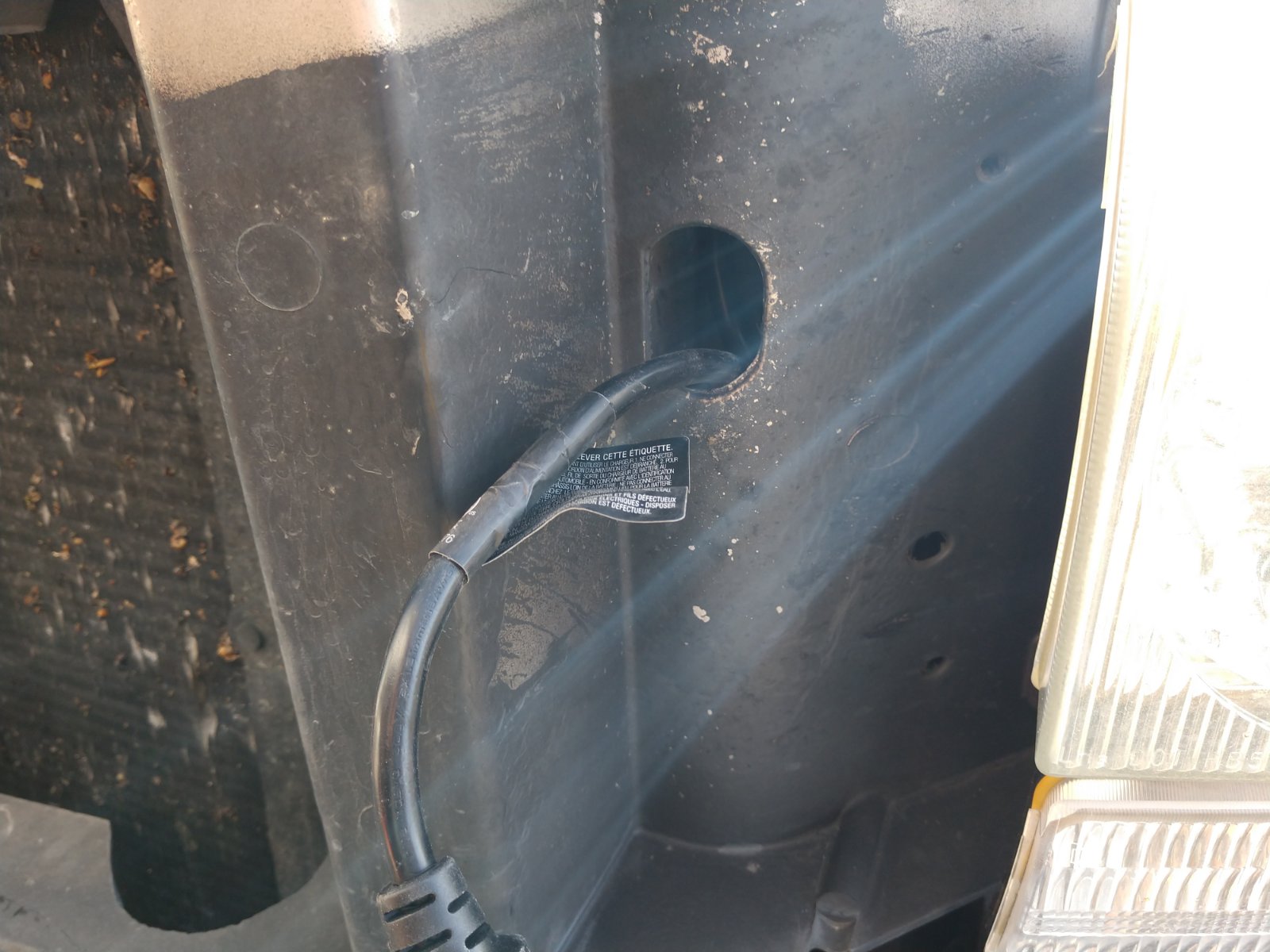 On the grille in front of that little spot is a small opening with a grille insert. Well, mine has been missing since the day I bought it, so I thought it would be a good idea to build an insert and run my two plugs through there. Yes, I said two. I decided this was where I would route my block heater. No more bending over for this crickety old back! lol I didn't just want a block-off plate with two cords hanging out though. I wanted it to look decent too...though I'll have to go back and improve the looks, though it's not horrible. Anyway, I decided to get some pass-through marine plug adapters. They allow you to use the plug you currently have and secure it to the pass-through. No cutting of wires required! Minn Kota MKR-21

You can see here how to plug from the cord fits into the back side. There is a screw-in fitting which secures it in place. I didn't snap a pic, but I also opted to seal around the plug with silicone after it was installed. 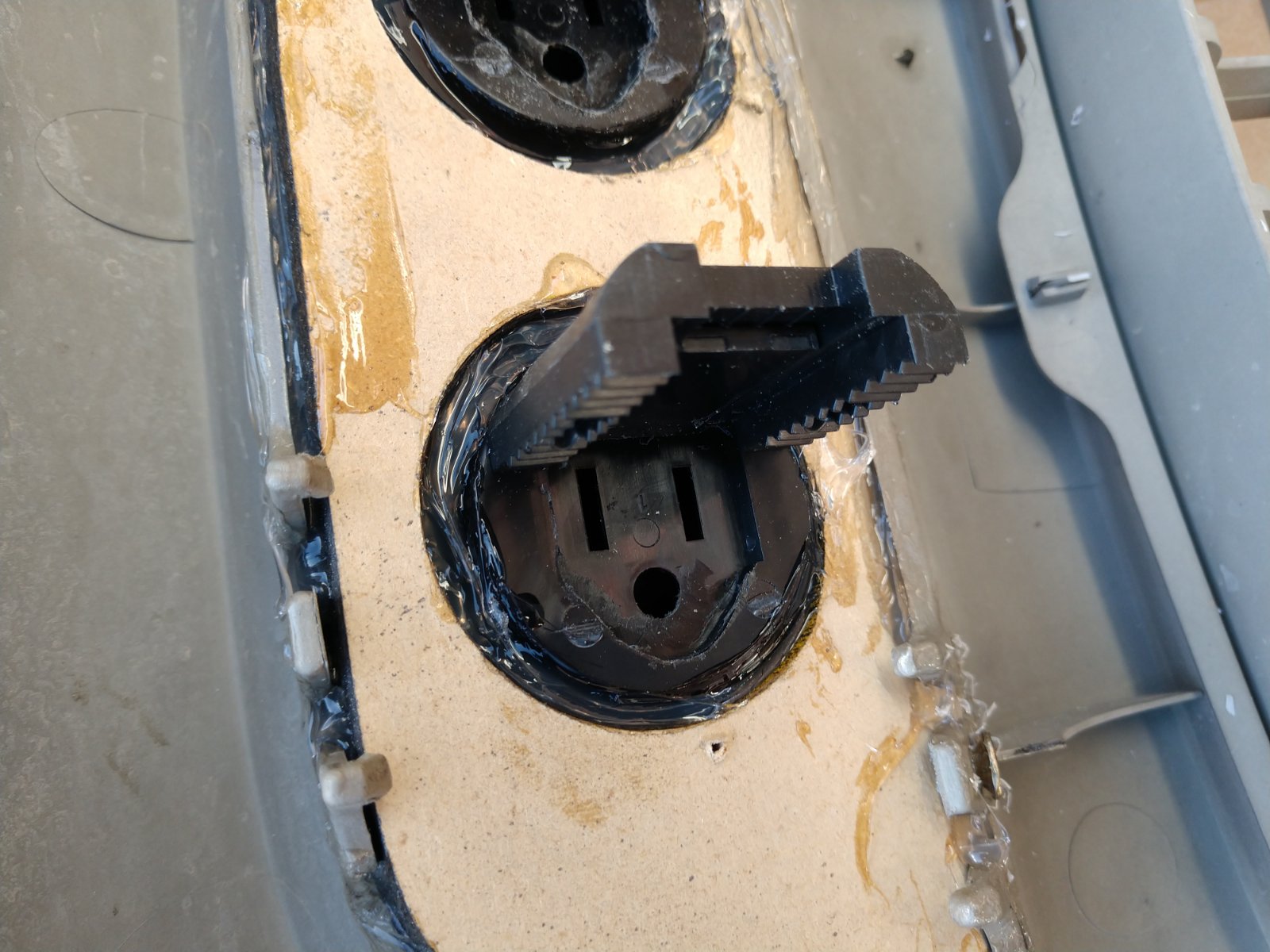 A pic of both installed. Also, even though it's not done in this pic, I highly suggest you seal any kind of wood used which will be exposed to the elements. Generally I use fiberglass resin brushed on fairly thin, but for this I wound up just spreading some more silicone with my finger along the back, and then painting the front followed by sealing it with a urethane clear coat....which I promptly screwed up, hence why I will have to fix this again later. lol 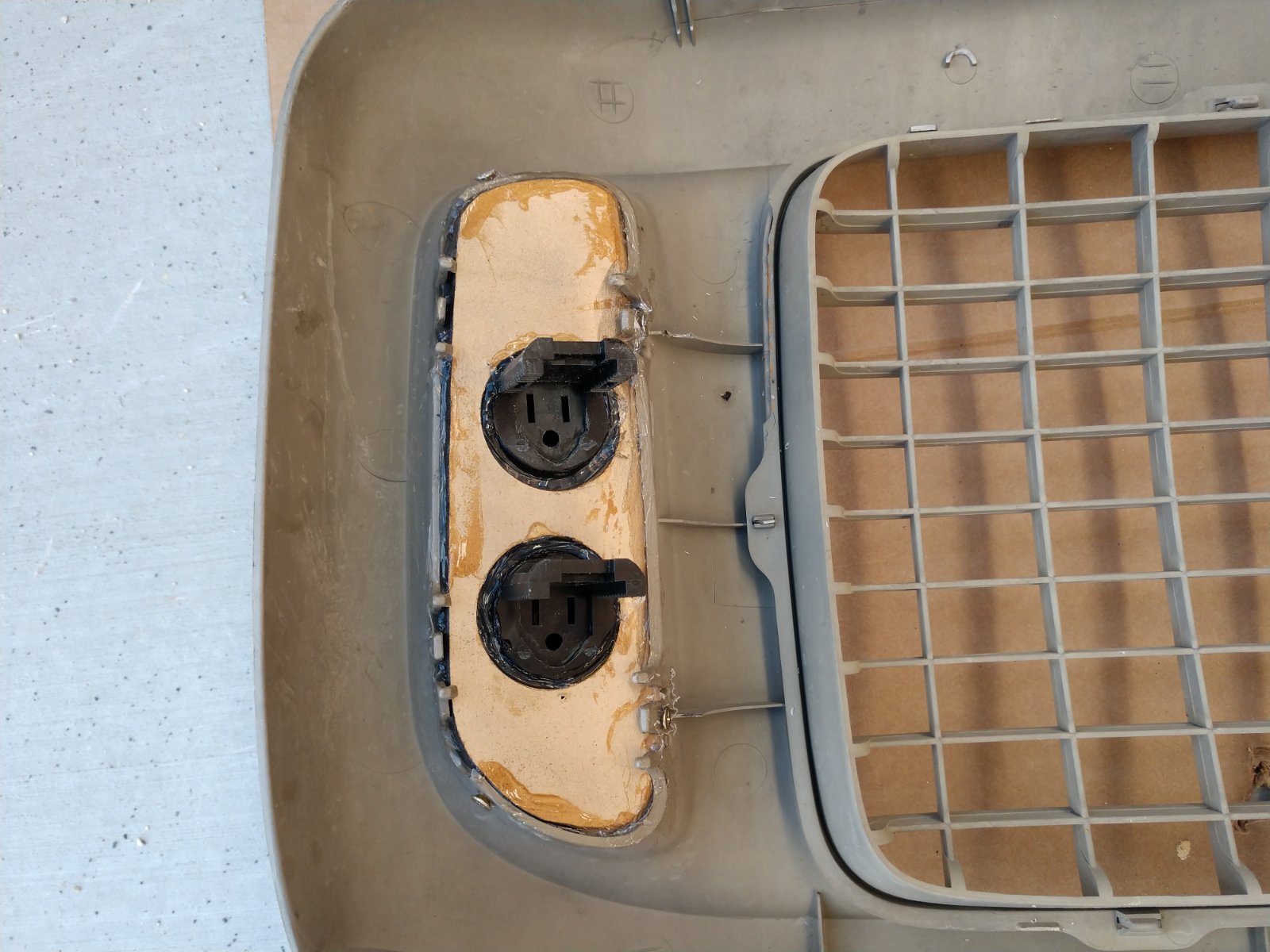 Some pics of what it looks like when the watertight cover is lifted both with and without a plug installed. 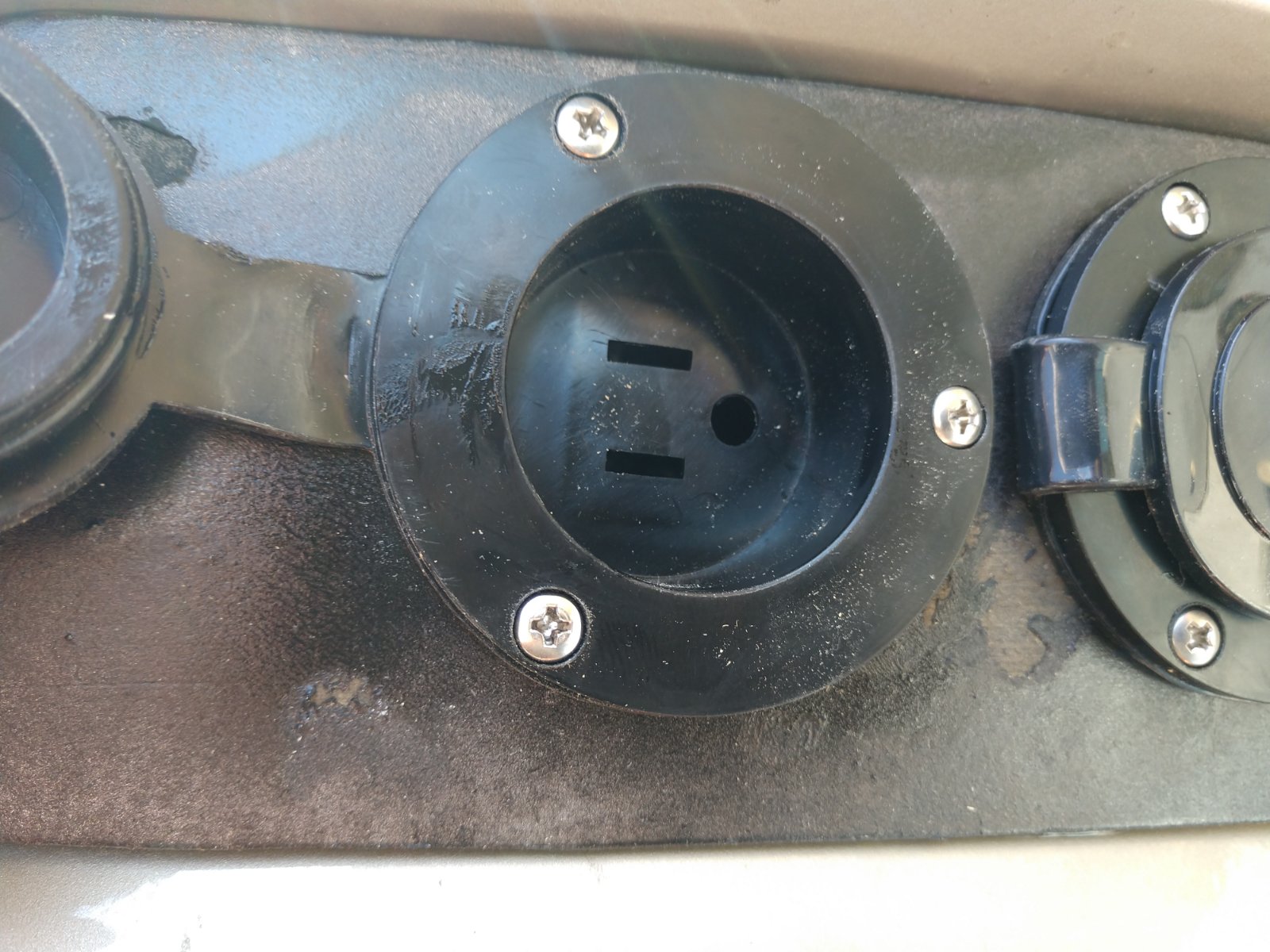 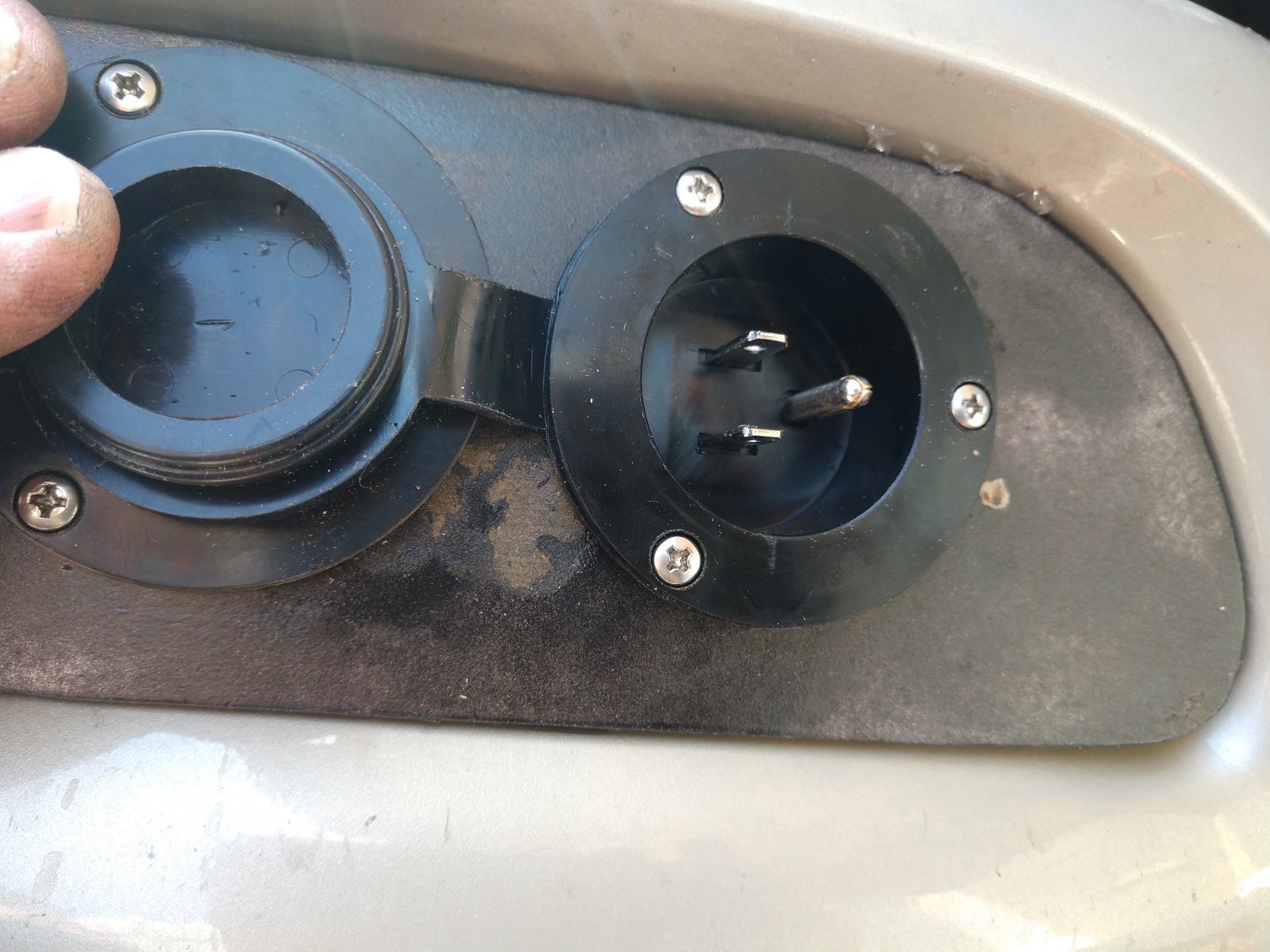 And finally a shot of it installed on the truck. 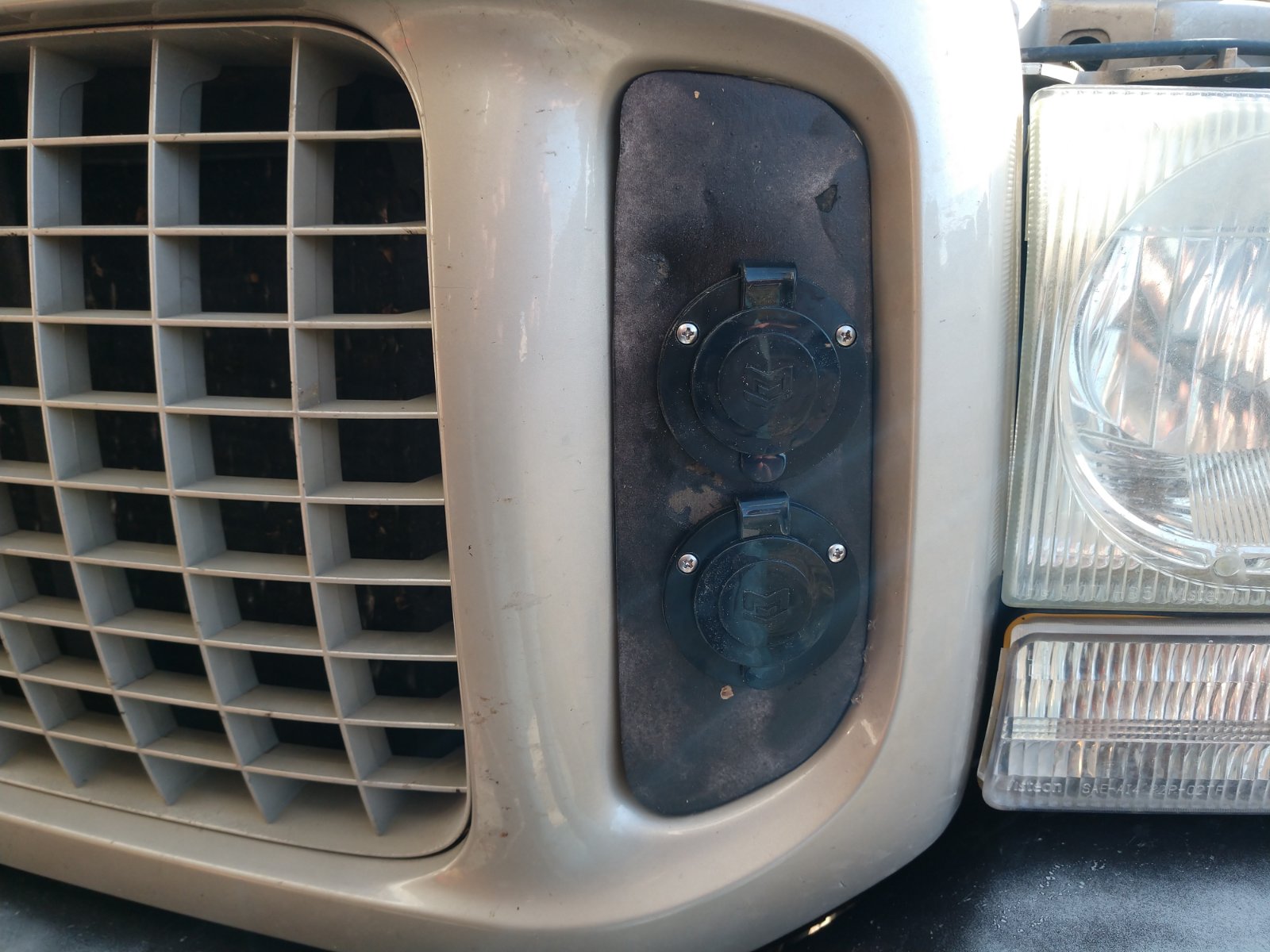 Overall, I'm happy with the outcome. Needs a few tweaks. Might re-do the grille insert, and when I do, change the angle of the pass-throughs. As they sit now, the power cords rub on the fiberglass support piece directly behind it. Re-angling will alleviate that. Could also use a little better shaping, but what I wound up with isn't so bad of a fit considering I used a jigsaw and some sandpaper on a piece of 3/4 MDF. lol Anyway, just sharing for those who might might be thinking about something similar or who might need ideas for other projects. As for how well it works, well the block heater works flawlessly now (it did before, but now the cord doesn't get hot), the battery stays topped off (still going to need new batteries soon anyway), and the task of plugging and unplugging is actually quite a bit easier now. Plus, IMO it just looks neat. lol

my truck has two banks i have not wanted to spend the extra coin for their two bank .. yet

Joined Apr 3, 2016
·
6,742 Posts
That is the same setup I am gathering for my trucks also. I agree with ZMANN on the noco chargers, and will be getting the 2 bank one just not ready to spend the money yet.

Sent from my super awesome outdated Samsung phone while waiting for masakimms# 500mA overdraw draw to catch fire which turd will be blamed for and we will be sitting on dustybumpers tailgate watching the fire and plotting against yommy.
S

i mounted the 4 amp NOCO on top of the ABS module, hard wired to the drivers side battery.